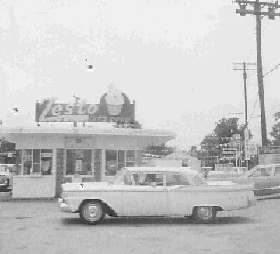 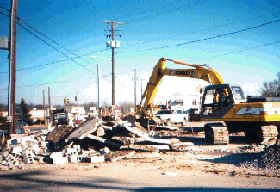 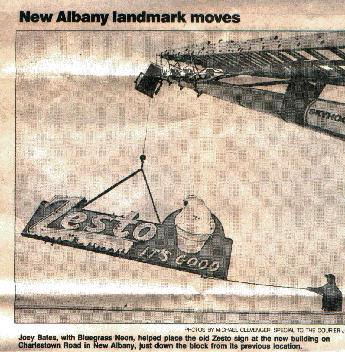 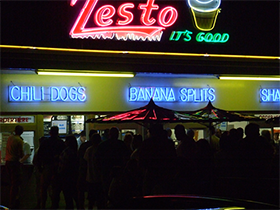 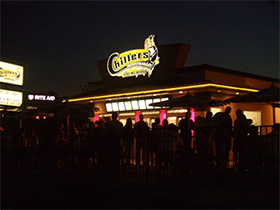 Built in 1951, Zesto has become a New Albany landmark over the years. Zesto is a family owned ice cream restaurant that specializes in creating delectable treats for all ages. Zesto is well known for its extensive dessert menu of premium quality desserts, low-fat real fruit yogurt, cleanliness, and friendly employees. Making Zesto stand out from its competition.

Along the years Zesto has had its fair share of up's and down's. Zesto was started in Atlanta, Georgia in the 1950's and quickly became a national franchise. In the late 1950's the chain experience financial problems and went out of business. The remaining stores were sold to individuals.

The New Albany location was purchased in 1966, by Don and Dottie Rosenbarger, who kept the name Zesto, but added a personal touch. The Rosenbarger family started with an extremely limited menu, only offering vanilla soft serve, shakes, ice cream cones, and sundaes.

In 1974, Zesto added chili dogs and popcorn to their menu. It wasn't in till 1986, when employees started to bring their own cheese to add to the hot dogs, when Mr. Rosenbarger took notice of this and decided to add cheese to the menu.

The 1980s brought chocolate ice cream. Previously, vanilla ice cream had been the only flavor ice cream a customer could choose. Ice cream was considered a special treat and not too many people where adventuress enough to try new flavors. This sudden craze for new ice cream flavors eventually led to one of the most popular treats Zesto has ever introduced, the 'Cyclone'.

In 1996, Zesto's very existence was threaten by something they couldn't control. The Department of Transportation demolished Zesto due to an intersection widening project. The family was determined to carry on the "Zesto tradition". Zesto then moved to an available building one block north on Charlestown Road . The same year the family also decided to pass the business down to Jim and Lisa Young, the Rosenbarger's daughter and son-in-law.

What a home run for Zesto. The new Zesto was bigger and better than ever. The move allowed for more parking, a drive-thru window, and a patio with umbrella covered tables. This new location in New Albany gained stability and grew which eventually lead to an additional store that open in Clarksville in Spring of 2000.

The future of Zesto is to focus on expanding, with the Chillers Brand, while maintaining the highest standards for their products and employees. The name change was necessary due to restrictions on expanding the Zesto name. Chillers begain offering franchises early 2010. For franchising information click here for details.

Over the 40 years of business, Zesto has changed to constantly keep in touch with the consumers changing taste buds. Zesto has added products and taken away others. Consistently learning and keeping in mind what mistakes we have made on our journey. Always sticking true to who we are as an organization and remembering what has made Zesto so successful will keep Zesto & Chillers a landmark for generations to come.